The Chairman of the Sreenidhi Institute of Science & Technology and Sreenidhi International School, Dr. Katikaneni Taher Mahhe, is a resident of Hyderabad, Andhra Pradesh. An oft-quoted name in the field of education, Dr. K.T. Mahhe began his entrepreneurial career in the early nineties, at a young age of 21 years, soon after completing his graduation from the Osmania University. At that time, India was undergoing a phase of transitions; Dr. Mahhe realized early that emerging India needed proper educational institutions to navigate the rapid transformation.

Dr. Mahhe started out as a distributor for a leading consumer product MNCs in Andhra Pradesh, earning spectacular success as his company soon turned into a behemoth with an annual turnover of Rs. 200 crore. He also took charge of the publication and distribution of The Economic Times in AP, which gave him deep insights into the newspaper publishing industry. By the time he was 29, he began publishing an English daily named Andhra Pradesh Times.

In the education sector, he began with technical education before moving to school education. He established the Sreenidhi Institute of Science and Technology in 1997 and started offering cutting edge courses in Mechanical Engineering, Electronics and Computer Science. Soon after, he set up an active industry- institution education platform to understand and adapt to rapidly advancing technologies. Over time, Sreenidhi College became a leader in the field of technical education. In a span of five years and a half, the institution was accredited by the National Board of Accreditation of AICTE. Recognition in its truest form came when Sreenidhi became the only private institution among 120 institutions from the region to be selected by the World Bank for assistance.

After closely observing the quality of students joining reputed professional educational institutions, Dr. K. T. Mahhe realized the significance of imparting quality education to students at a young age. He established a School from Nursery to Grade 12th with state-of-the-art facilities. He scouted around the globe, visiting the best educational institutions everywhere to see their best practices which could be inculcated in this new institution. He adopted rapidly growing international curriculum along with the other established curriculum. This school called Sreenidhi International School is one of the leading private schools in Hyderabad today.

Dr. Mahhe is also at the helm of the KMR Foundation, set up in the memory of his father, K. Mahipathi Rao. Since its inception, the Foundation has undertaken several projects that seek to help the underprivileged in the outskirts of Hyderabad city. 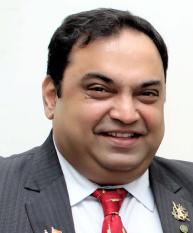